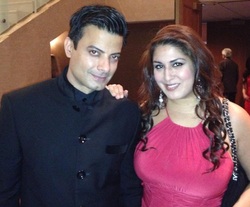 Actor Rahul Bhat
﻿﻿The New York Indian Film Festival (NYIFF) celebrated their 14th year of  independent, alternate, and Diaspora films from/about  the Indian subcontinent on May 5th -10th at the ﻿Village East Cinema﻿ and the Skirball Center. The festival featured 34 screenings (23 narrative, 11 documentary) –all seen for the first time in New York City.

The festival highlights included screenings of films from all over India: Marathi, Bengali,  and the Northeast, four films by Pakistani filmmakers, two from Sri Lanka and one from Nepal. An opening night which featured the debut of "Ugly", a film by Anurag Kashyap, this film starred Rahul Bhat and tells a story of a kidnapped child and ugliness that came along with trying to locate the missing child which included infidelity, greed, dishonesty and much more. The story is very gripping and is a film that will be released soon in India.

The exciting film festival also featured a film that even those in India might not have gotten the chance to see. Nagesh Kukunoor’s "Lakshmi", this film had censorship issues in India because of its daring subject of child prostitution and human trafficking. This film is a must see as it tells a true stoy of a child that was led into this life and an important message of fighting back for what is right and wrong.

For information on IAAC Events and Festivals visit: www.iaac.us