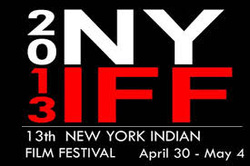 The New York Indian Film Festival celebrated their 13th year last week in Manhattan! The festival was held on April 30th- May 4th and was a celebrity-filled festival full of Red Carpet Premieres, discussions and industry panels. The festival was held in various locations throughout the city including  the Skirball Center for Performing Arts and Tribeca Cinemas.

The Red Carpets were filled with celebrities such as Mira Nair, Pooja Kumar, Padma Lakshmi,  Purva Bedi, Obaid Kadwani and many more. The festival featured many films including the premiere of "Atma" starring Bipasha Basu, old classic films such as "Jaane Bhi Do Yaara" and many more!

Check out our coverage of the film festival below: