Want to do Lunch? 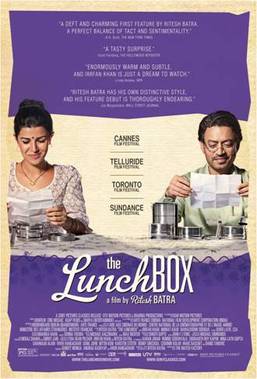 ﻿Ritesh Batra’s debut feature "The Lunchbox" is a romance that takes place in Mumbai, but it's style is more Hollywood than Bollywood. There are no dance sequences and is a simple yet thought provoking movie.﻿

The main characters are Ila (Nimrat Kaur) who is a neglected housewife, and Mr. Fernandes (Irrfan Khan) who is a widowed office worker nearing retirement.

Their story begins when Ila cooks a special meal for her husband to win his heart through his stomach (as the saying goes "A way to a man's heart is through his stomach")- she ships her tiffin to her husband by a "dabbawalla" and it accidentally reaches Mr. Fernandes. When she receives the tiffin back she was delighted that her husband finished the entire meal. In the evening she relayed her happiness to her husband and he retorted that she always makes the same bland food. Ila realizes that her meal did not go to her husband as intended so she writes to the man that enjoyed her food and thus began a journey of communication via letters that eventually evolved into love.

The story is simple yet beautiful --both parties have a need for companionship –one from a loveless marriage and one who had lost his love to death—through this daily communication they build a relationship that eventually leads to a love and understanding for each other. The ending is very abrupt but it leads you to imagine your own ending to this beautiful unexpected love story.

The movie is very emotional and definitely worth watching. It has just been released in selected theaters so make the time to check it out - maybe over lunch!