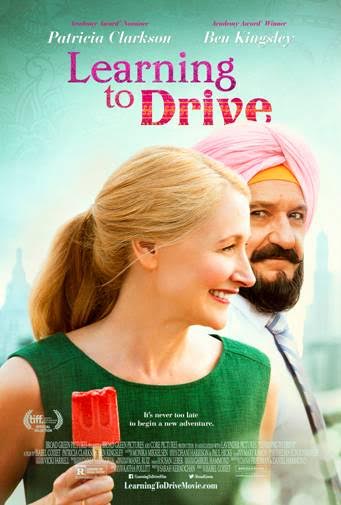 Earning a prestigious Critics Pick from the New York Times, the acclaimed new comedy LEARNING TO DRIVE is now playing in New York and Los Angeles and will release this Friday, August 28, in San Francisco, Chicago, and Boston. By Labor Day weekend, the award-winning film starring Sir Ben Kingsley, Patricia Clarkson, and Sarita Choudhury will be playing in most major cities nationwide.

Sir Ben Kingsley has won an Oscar, Grammy, BAFTA, two Golden Globes and countless other awards in his career and now takes on the role of New York City driving instructor Darwan in his latest film LEARNING TO DRIVE. Kingsley sat down to talk about his new film in this exclusive interview below:

UM: What was it about this story that made you want to be a part of it?

BK: So, there are certain scripts that I come across that have what I would call a universality in that they do examine and reflect with great accuracy what I call patterns of human behavior, or "the human dance."  And when I come across a script that has this so beautifully observed, I'm immediately intrigued.  Also, I think part of the enjoyment of the film for the audience is that it will have an immediate resonance because of modern day New York and the world that we live in.

UM: When someone asks you what you're working on, what is the quick description that you give about this film?
BK: What we have is two individuals that probably are unlikely to meet.  In everyday circumstances.  Coming from very different backgrounds, very different cultures.  But intellectually equal.  What I'm saying is that they're both intelligent, and curious.  And by a series of accidents, this -- these unlikely people are - and don't forget, a car is a very small space, so it's almost an intimate space, but then again, it doesn't become sexually intimate or romantically intimate.  But it becomes a friendship without which their lives would not be complete, so it is a film that explores two people, thrown together in the most unlikely circumstances who both gain enormously from that accident of coming together.

UM: What does Teacher learn from Student in this story?
BK: I think that ideally there is always a flow.  I'm often asked, "what do you think the actors learn from you when they're working from you?"  Learn from me.  And I say, "That's not the point.  The point is, that the acting arena is very democratic, and that you stand a chance, if you are alert as an actor, of learning a great deal from the other, simply by being alert to the other."  I think that life can be a continuous learning process, if you are alert to the other.  If you are not alert, you'll miss out on an enormous amount of life's riches, the information that is coming at you every day.  In that sense, of course, in the relationship between Patricia Clarkson's character and mine, there is so much reciprocation, the one learns from the other.  Actually there is quite a lovely scene in the film, where I ask her what to do.  It's a very vulnerable moment, and therefore is a perfect example of what you were, you know, interested in, and there it is, in the film.  That he faces her and asks her what to do, how can I talk to her?  There are many beautiful moments like that where you do see that, my goodness, this is a completely balanced friendship.


UM: What kind of preparation did you do to play this character?
BK: I think that when you are blessed with a universal theme, the way that the writer and director and actors introduce this theme would not be making a film about a ferryman.  It would be making a film about a modern, New York taxi driver/driving instructor, and a very modern woman as his student and his passenger. I think you really convey the essence of a story by being specific.  Not by being splurgy, generalized, universal.  So, the specificity of him being a Sikh, and that silhouette is extraordinary, it's instantly recognizable, has been confused for all sorts of, you know, ridiculous and tragic reasons.  Tragic reasons.  Consequences.  Being acquainted with India and her history, I did whilst filming Gandhi have a Sikh bodyguard-driver.  I spent months with this man.  And, on the toughest day of shooting of Gandhi, "tough" as in "exquisite," but "tough" as in "hard" as well, we were driving away from this enormous crowd. After nine hours of utterly exhausting, extraordinary filming, and I saw the back of his head, and his turban, driving me in his Ambassador, sitting behind him, and he said, and he looked in his mirror, rearview mirror, and he just said, "Well done, sir."  And I thought, there he is.  There he is.

UM: You’ve worked with Patricia Clarkson before.  What was it like working with her on this film?
BK: I think that the essential thing in the two performances guided by the brilliant Isabel Coixet, and filmed beautifully too, and she operates her own camera, is that Darwan Singh and Patricia - Wendy - do need to stay in their own bubble.  That is to say they have to remain utterly themselves, throughout the film.  Then, as in any scientific sense, you get a flow of electricity between a positive and a negative.  And, once they become neutralized, then the flow doesn't happen.  So, this is good for any young actor listening to me, stay inside the silhouette of your character.  Then things will flow.  If you move out of that silhouette, and compromise it in some sense, there won't be any flow.  So I stayed within Darwan's silhouette for most of the shooting, on set, and she remained very much in Wendy's silhouette for most of the shooting.  And, it was a wonderful experience, and I saw her recently in Elephant Man on the London stage.  And as I looked at her I thought, that's my leading lady in my film.  And I felt very proud of her.

UM: There is some subtle humor in this character.  How did you approach that?
BK: I think Darwan Singh is what I would call a very rounded personality.  Don't forget - he's a university professor.  And to have a career as a university professor, facing students every day, you have to have a sense of humor.  You have to infuse your lectures, your teaching process, with that wit.  It's wit.  That's what it is.  And I think he was born with it.  I think it's in his DNA.  I think it's in his family structure.  I think it's in the way he thinks and debates about things, a sense of irony.  A beautifully balanced, rounded personality.  And, so, I think that that always should be a natural ingredient in any well-rounded character that I'm invited to play.  It's there, you know?