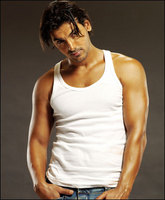 Besides acting John Abraham is deeply rooted in social causes and urges others to join in his humanitarian efforts. Abraham supports many causes such as PETA, Habitat for Humanity, CRY, Make a Wish and many other non-profit organizations. Abraham was also reported to have made a significant donation to a hospital in Mumbai, India.

John Abraham not only possesses a gorgeous body, a wonderful smile, acting talent, but he also possesses a big heart that supports various causes. We look forward to John Abraham's flourishing career and love that he spreads the message of helping others.

See below for an interview with John Abraham for Urban Milan readers: