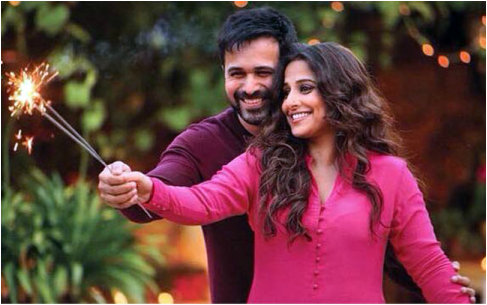 After watching the promos for this eagerly awaited love saga by Director Mohit Suri, one expected to experience another tragic yet heart-wrenching story revolving around a soulful romantic relationship much like his previous works Kalyug, Aashiqui 2, and Ek Villian. But alas, filmmaker Suri has failed miserably in his attempt to churn out another runaway hit at the box office. What should have been an epic tear jerker turned out to be an un-intentional comedy.

Penned by acclaimed Writer/Director Mahesh Bhatt, Hamari Adhuri Kahani fails to evoke any genuine emotion. Like most Vishesh Film trademarks, this one also appears to be inspired by both Hollywood and Bollywood alike. There are glimpses of Maid in Manhattan along with Kahani slipping in devoid of any purpose. The film shifts from being modern, to regressive, to just plain ludicrous! Despite hiring a powerhouse performer like Balan, Suri orders her to glare at abandon with endless glycerin rolling down her cheeks. It’s tough to empathize with Vasudha’s struggles, or her desire to be happy. When a woman walks in the middle of the desert, with a suitcase in hand, you know she’s got it terribly wrong. Balan’s evidently uncomfortable portraying Vasudha and plays her rather off-key. It’s when she sneaks away to click a sensuous selfie can you sense the complete disconnect. Considering much of Bhatt’s work as a director have featured potent women even when it wasn’t “fashionable” in Bollywood, this film really makes no sense and is a disservice to a phenomenal actor like Vidya Balan.

Emraan Hashmi, as business tycoon Ruparel and Vasudha’s “knight in shining armor” is equally detached.  He falls in love in a matter of seconds once Vasudha reveals her tragic single parent story, which ironically, resembles his mother’s (shown in strategically placed and poorly acted flashbacks).  Overall, Hashmi has melodious tunes to lip-sync, but nothing more to contribute. “Can I take your picture?” was his most repeated dialogue throughout the film. He’s joined by an irritating BFF who is on flight-check all the time. Rajkummar Rao oscillates back and forth between Shah Rukh Khan’s trembling old man portrayal in Veer Zaara and an abusive husband. It’s a pity how his talent is wasted.

If stellar performances and a gripping storyline is not a priority for you, then go in for the laughs!