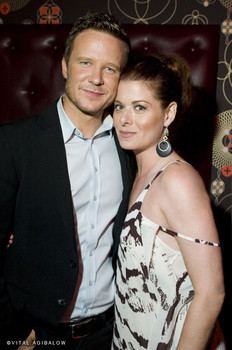 The Director (Sania Jhankar) got the idea for the film from her Father, who saw an article about a patient that had a sleeping disorder and a doctor that was trying to help him. Jhankar mentioned that she started working on the script seven years ago and after eleven drafts, she finally started filming. This is the first feature film that Jhankar has directed.

The story is based around Bill Baker, who is a kind, sensitive and content man, enjoys life's simple pleasures, such as tilling his garden or playing with butterflies. His seemingly fulfilling life is disrupted by Pavornocturnus - a night terror disorder that causes Bill to commit violent acts while asleep. His disorder can only be relieved with a unique, dangerous, and mind-altering technology.

Other guests in attendance included Debra Messing, Will Chase's two daughters and his parents. Sterling Jerins was joined by her family including older sister actress Ruby Jerins ("Nurse Jackie"). VH1 "Gossip Table" Personality Delaina Dixon was in attendance, as well.

Guests enjoyed Baked By Melissa cupcakes and fabulous cocktails from The DL.After the reception guests headed uptown to Hunter College, where the film World Premiered as a part of the Manhattan Film Festival.

Sania Jhankar & Reema Dutta's next film is in scripting stages, "Second's --it's about relationships and  it takes place in two different continents and about how different relationships affect people in who have never met each other" 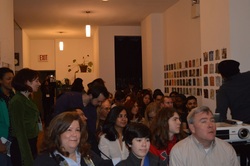 On Friday evening, the 2nd Annual Brooklyn Girl Film Festival hosted the first ever screening of of Sania Jhankar's feature directorial debut "Butterflies of Bill Baker." The film's stars Zuzanna Szadkowski ("Gossip Girl") and Sterling Jerins ("World War Z") were in attendance in addition to Producer Reema Dutt.  Jhankar and Dutt met at NYU, where they started to make films together. "We are thrilled to showcase the film in the very city that inspired us to pursue this field," Jhankar said.

Bill Baker, a kind, sensitive and content man, enjoys life's simple pleasures, such as tilling his garden or playing with butterflies. His seemingly fulfilling life is disrupted by Pavornocturnus - a night terror disorder that causes Bill to commit violent acts while asleep. His disorder can only be relieved with a unique, dangerous, and mind-altering technology.

The screening was followed by a Q&A. Jhanker who also co-wrote the screenplay said that an article about the disorder Pavornocturnus
inspired the film. It was shot last summer over 21 days and also stars Will Chase ("Smash") and Marin Hinkle ("Deception" "Two and a Half Men").

Brooklyn Girl Film Festival celebrates the art of women filmmakers from around the world, bringing a dazzling array of both short and feature films from a select group of directors to Brooklyn. The festival strives to promote an understanding of diverse cultures by displaying the passions and unique visions of these filmmakers, both entertaining and educating the viewers. The festival screened 30 shorts and 4 feature films at Launchpad, 721 Franklin Ave, Brooklyn, NY 11218

For more information visit: www.brooklyngirlfilmfest.com "Butterflies of Bill Baker" will have a theatrical screening in the early summer that will feature the full cast.

See below for the first screening of "Butterflies of Bill Baker" at the Brooklyn Girl Film Festival: