BROTHERS: A Pitiful Remake of Warriors 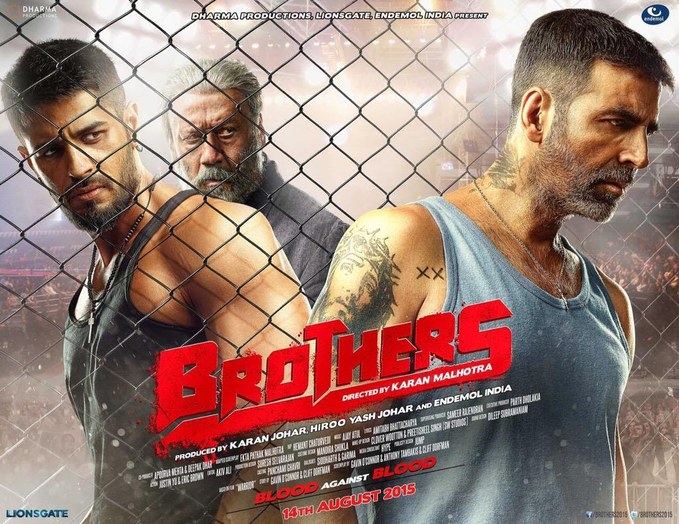 Karan Malhotra’s Brothers does not even hold a candle to Gavin O’Connor’s critically acclaimed Warriors.  It relies heavily on formula driven content, a melodramatic interpretation, and hammed up performances by the supporting cast including Jackie Shroff, Ashutosh Rana, and Kiran Kumar.

There's so much going wrong in Brothers, it's difficult to pinpoint the worst aspect of the film. The first half is slowed down by flashbacks that ceases to take the story forward. In the second half, the R2F tournament takes center stage. Instead of being a heart thumping and  jaw dropping experience, this battle of the athletes turns out to be in fact a battle of the buffoons. We witness some caricatured fighters with uncanny background scores and fighting techniques who try their best to appear like hardened criminals rather than skilled sportsmen. And then to add to the hilarity, Kareena Kapoor Khan appears randomly on screen adorned in sequins and shaking her ass on a forgettable tune without an ounce of grace, rhythm, or an Oo La La appeal.

As far as the lead cast is concerned, Sidharth Malhotra is a huge let down. Although the actor has worked hard to beef up for the part, he does not possess even a trace of the fury or the grit required for the role. Moreover, Malhotra struggles to emote—at all. Whether he's sad, angry, confused, or drunk, he looks pretty much the same.

The only ray of hope in Brothers is Akshay Kumar in his revived ‘action hero’ avatar. The grace, strength, and fluidity he displays in his movements particularly when he's fighting or training makes him a joy to watch. In addition, his restrained and mature performance during the emotional scenes in the film made him stand apart from the rest of the cast who over acted grotesquely. Another special mention should be given to Shefali Shah. Although she only appears in the first half of the film, she makes an impact with her powerful portrayal of a woman who must deal with her husband’s betrayal and become mother to his illegitimate child.  Although a wee bit similar to the plot of Shekar Kapur’s Masoom, we’ll let that slide.

Unfortunately, that's not enough to redeem Brothers. This remake removes all logic, exaggerates emotions, and reinforces stereotypes assuming Indian audiences are incompetent. Every point in this film is spelled out and repeated. For instance, when David wins a fight, we're shown a text message in which he has written "I WON!!!" as well as a host of other characters who say "David has won!" — just in case we hadn't picked up on this fact from David having broken his opponent's bones and the referee holding up David's hand at the end of the fight.

Overall Brothers does not impress and fails miserably at adapting a successful screenplay.