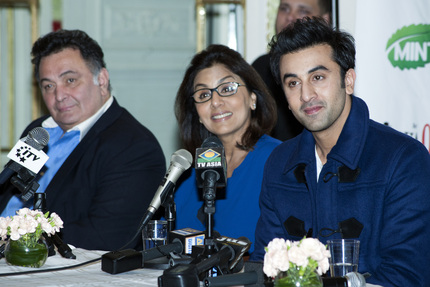 Rishi, Neetu and Ranbir Kapoor
NYC: Bollywood's legendary Kapoor family made a visit to the Grand Ballroom of the Consulate General of India in New York City on Monday, September 23, 2013 for a press conference on the release of the film "Besharam".  The movie stars Ranbir Kapoor and his parents, this movie is set to become one of the most widely released Bollywood films worldwide.

Ranbir Kapoor, a member of India's "first family of film" and the grandson of veteran Bollywood director Raj Kapoor, plays a charming but vulgar car thief in the action comedy that opens on Wednesday, October 2nd in 4,700 cinemas internationally, including 210 in the United States.

His parents, leading Bollywood stars Rishi Kapoor and Neetu Kapoor, play
police agents in the film, marking the first time the three popular actors from two generations have been in the same movie in what distributor Reliance Entertainment chief Sanjeev Lamba called a "casting coup." Kapoor said he was attracted to "Besharam" by its simplicity.

Ranbir, who studied acting in New York at the School of Visual Arts and the prestigious Lee Strasberg Institute, was overjoyed to be back in one of his favorite cities in the world. The cast answered numerous questions from the media about both their new project BESHARAM as well as the many past hits from the Kapoor family with Rishi sharing personal stories of working with his iconic father Raj Kapoor. Ranbir, when asked who has been his favorite actress to work with, said without hesitation that it was his mother.

Consul General of India Dnyaneshwar Mulay introduced the film team and highlighted the contributions that the Kapoors have made during 100 years of Indian cinema. "Besharam" will be in a theater near you on October 2nd! 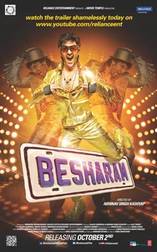 Bollywood superstar Ranbir Kapoor shamelessly returns to theaters across North America with his latest fun-filled escapade in the new comedy BESHARAM, this time being joined on-screen for the first time by his legendary parents Rishi Kapoor and Neetu Kapoor!

A heartthrob to millions, Ranbir is fresh off the runaway success of his summer smash Yeh Jawaani Hai Deewani which became the third biggest Bollywood blockbuster of all-time. His previous film Barfi won rave reviews and was selected as India’s official submission to the Oscars.

SYNOPSIS: Babli (Ranbir Kapoor) is a street smart car mechanic living in a Delhi orphanage. He is charming and lives life to the fullest. He also steals cars to support his orphanage. He has no sense of right or wrong till he unwittingly hurts the love of his life, Tara (Pallavi Sharda) and is chased by cop couple Chulbul Chautala (Rishi Kapoor) and Bulbul Chautala (Neetu Kapoor). Babli realizes that there is no right way of doing the wrong thing. Babli sets out to fix all the wrongs in his life and he continues to be shameless about it.

Now, the dazzling and energetic young star lights up the screen once again with BESHARAM which releases on October 2. Watch the subtitled theatrical trailer